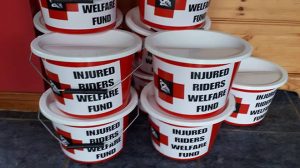 The Injured Riders Welfare Fund would like to Margaret McCooke for £127-27 she raised in memory of Bert.

They have always been big supporters of our fund.

Text from and all credit to  Tom McClean Positive Belfast

Bert – “Mr McCook, from Armoy, followed road racing all his life. He was friends with many of the riders on the local circuit and began gathering helmets and other memorabilia several years ago. Since then, he became a familiar sight at various bike shows, exhibiting his collection to help raise funds for the Injured Riders’ Welfare Fund.”

“His charity work attracted support from many riders who regularly donated material as his collection grew. Following the passing of Mr McCook, his family announced that the treasured collection would be presented to Ballymoney Museum.”

We use cookies on our website to give you the most relevant experience by remembering your preferences and repeat visits. By clicking “Accept”, you consent to the use of ALL the cookies.
Cookie settingsACCEPT
Manage consent

This website uses cookies to improve your experience while you navigate through the website. Out of these, the cookies that are categorized as necessary are stored on your browser as they are essential for the working of basic functionalities of the website. We also use third-party cookies that help us analyze and understand how you use this website. These cookies will be stored in your browser only with your consent. You also have the option to opt-out of these cookies. But opting out of some of these cookies may affect your browsing experience.
Necessary Always Enabled
Necessary cookies are absolutely essential for the website to function properly. This category only includes cookies that ensures basic functionalities and security features of the website. These cookies do not store any personal information.
Non-necessary
Any cookies that may not be particularly necessary for the website to function and is used specifically to collect user personal data via analytics, ads, other embedded contents are termed as non-necessary cookies. It is mandatory to procure user consent prior to running these cookies on your website.
SAVE & ACCEPT